The excavation at the prehistoric Koçumbeli habitation, located in the mountainous area, 1400 m. south of Yalıncak village, was started by a team from Middle East Technical University and the Museum of Anatolian Civilazations in Ankara under the directorship of Mr. Burhan Tezcan, between 1965-66 the excavations were continued by Prof.Dr. Cevdet Bayburtluoğlu and Prof.Dr. Sevim Buluç. Koçumbeli has three habitation levels, dated back to the Early Bronze Age (2500-2300 BC). Like Ahlatlıbel, it occupies only a specific period in prehistory indicating that there was neither an earlier nor a later habitation. Koçumbeli shared a similar culture with the other Early Bronze Age sites of Karaoğlan, Ahlatlıbel and Etiyokuşu in the vicinity of Ankara.

In Koçumbeli which was a rather large village, the houses constituted groups of rooms in a rectangular or trapezoidal plan. The houses generally contain two rooms, a rectangular/trapezoidal and a round room attached to it. They were constructed by walls made of mudbrick on rough stone foundations. A stone base with a post hole in it, indicates that single storey houses were built with pitched roofs supported by timber posts placed in hollowed bases. Round and square hearths were either in the house next to the walls or out in the courtyard. The general area of the houses was encircled by a wall which may be termed as a "city-wall".

Among the archaeological remains found in Koçumbeli were, pots and pans, idols, figurines spindle whorls and stamp seals which mostly belonged to daily-use of prehistoric life. These finds reflect the socio-economic level of the Early Bronze Age cultures. In the site, the primary activities related to the economy were stock breeding and textile production. Moreover, the numerous female idols found, reveal the fact that, like all the other civilizations of Anatolia, the cult of the mother goddess was practiced in Koçumbeli. The stamp seals are also many in number. This indicates the strong sense of ownership in the economy.

Most of the pottery is slipped and polished. The ware types in the form of small cups with or without handles are very common in Koçumbeli. Other forms are the round body shaped, flat based ones, spouted pots and mugs with knobbed decoration on their body. Beaked mugs and pitchers were also found. The black polished fluted teapots could be the copies of similar metal vases. Apart from its architecture, Koçumbeli shows great similarity in the assemblege of artifacts to the other Early Bronze Age settlements around Ankara.

The only grave found within the site was built as a round pit and topped by a stone cover. A metal spear head and a large nail were left inside as burial gifts. In addition, the ears of the dead body were plugged with golden ear-plugs. The same type of ear plugs were found also in Karayavşan, Elmalı-Semayük and in some of Early Bronze Age graves of Alacahöyük.

Finds recovered from Koçumbeli excavations are currently being exhibited at METU Archaeological Museum. 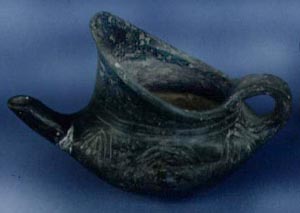 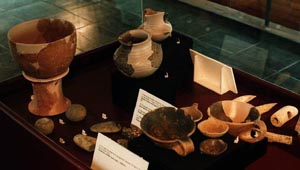 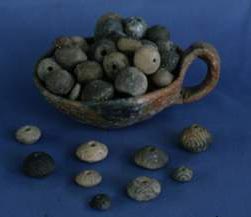