The excavations of Ahlatlıbel which was one of the important sites of Early Bronze Age in the vicinity of Ankara , were initiated by Atatürk in 1933 and directed by Prof.Dr. Hamit Zübeyr Koşay. Today finds from Ahlatlıbel are exhibited in the Museum of Anatolian Civilizations.

Ahlatlıbel is situated on a high ground of plateau in calcareous formation overlooking the Middle East Technical University campus at its southern fringe. The habitation area is surrounded by fortification walls. The northern and western sections of the fortress are terraced. The terraces were built in form of two parallel walls of rough local limestone. These walls are subdivided into compartments, which are filled with rubble stones. There is an opening on the west wall of the fortress, providing access to the spring nearby. A triangular and a half circular shaped projection are added to each side of the entrance to control passage.

Ahlatlıbel was not inhabited continously, it was abondoned after a short period of occupation. Similar to Karaoğlan, the dead were buried in the corners of rooms or under the rooms in the foundation level or on the exterior sides of the walls of such rooms. The knees are bent in all cases. Six of the skeletons were found in pithoi, the rest in graves surrounded by stones in somewhat regular form. In the case of male examples spear heads were found as burial gifts, and for females, bronze bracelets, torque, rings and gold ornaments.

A large number of grinding stones, and animal bones were also found, indicating that agriculture and animal husbandary played a major role in the economy. The forms of pottery, spindle whorls, figurines are very much like those found in Koçumbeli and Karaoğlan. 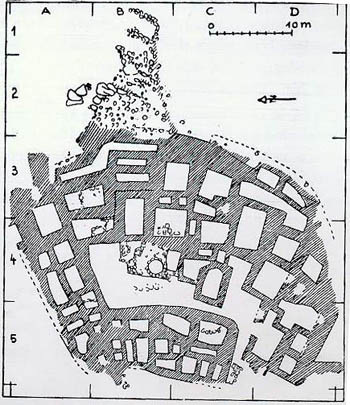