The co-operative effort towards salvaging the historical monuments and sites of the region that expected to be flooded through the construction of Keban dam in 1960s led to the organisation of a managing committee of representatives from several institutions, Department of Prehistory of Istanbul University, Department of Restoration of Historic Monuments of METU, Directorate of Antiquities and Museums, Directorate of Turkish Historical Society, under the leadership of the President of METU.

As for the excavations that have been carried out for several years by METU in Keban and the Lower Euphrates regions, these were began in 1968 in those areas to be doomed by the reservoirs of dams under construction. Funds were made available from public and other sources by the former president of METU, Mr. Kemal Kurdaş, who, though an economist by profession, was passionately interested in archaeology. He also made it possible for the excavations in the Lower Euphrates region to continue with the same objectives in view. Reports on excavations in Keban and Lower Euphrates regions were published annually. Foreign institutions had also participated in these activities as a result of the initiative taken by METU. 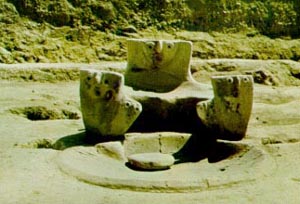 The work, which began with surface investigations and conducted as programmed, may be summarised as follows:

In 1966 surface investigations were carried out in Keban expected reservoir area by the Department of Restoration and Preservation of Historic Monuments of METU. In 1967, surface investigations were carried out by the Department of Prehistory of Istanbul University in a collaboration with the University of Michigan. In 1968 excavations were began at the following sites in Keban basin: Ağın, Kalaycık, Aşvan, Fatmalı, Kalecik, Korucutepe, Norşuntepe, Pağnik Öreni-Kaşpınar, Pulur, Yeniköy, Tepecik, Tülintepe, Haraba, Han İbrahim Şah, Değirmentepe.

With the filling of Keban dam reservoir in 1974, and implementation of the Lower Euphrates Dam Project by DSİ (State Hydraulic Affairs), the METU Keban Project had to extend its rescue operations downstream, in view of archaeological evidence in the Lower Euphrates Basin and determining the necessary rescue operations there. As for the investigations in the Lower Euphrates Region, surface investigations were carried out in 1975-77 and excavations started in 1978. They were conducted as scheduled at the following sites: Ancoz, Değirmentepe, Kaleköy, Köşkerbaba, Şemsiyetepe, Pirot, Samsat, Horiskale, İmamoğlu, Caferhöyük, Tille, Lidar, Hassek Höyük, Kurban Höyük and Hayaz.

By managing over 16 of excavations in the same region, Keban and the Lower Euphrates Projects realised large-scale rescue operations by handling the most recent methods and techniques applied in archaeology which had implications for Turkish archaeology. In addition to these excavations, works were also being carried out in documentation on various fields of research, such as traditional architecture, rural sociology, anthropology, and paleo-environmental studies.

Before the METU Keban Project, very few ancient sites have been excavated in the South-East Anatolia. The results of Keban Project clearly demonstrated the importance of the region for the cultural history and established its archaeological sequence from the Paleolithic Age to the end of Middle Ages. 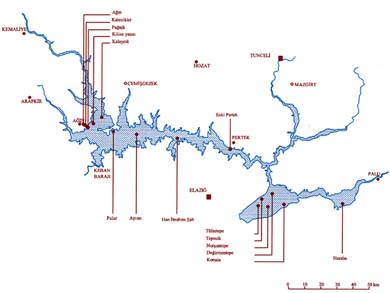 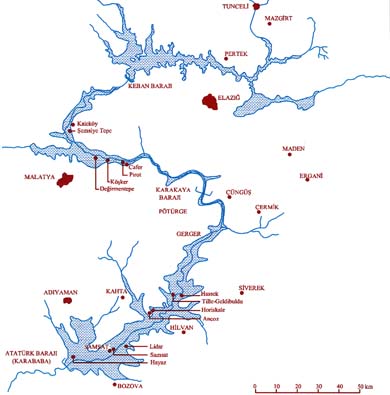