This study aims to provide the archaeological potential of the areas in Baku-Tbilisi-Ceyhan Crude Oil Pipeline route within the Republic of Turkey’s part between from Posof to Yumurtalık, 500 m wide, 1062 km long corridor during the detailed engineering phase and to propose cultural heritage management plan by minimizing or eliminating adverse effects of BTC Crude Oil Pipeline for optimal solutions in such an ambitious intervention. Archaeological research and assessment  for BTC Crude Oil Pipeline Project has been carried out to meet the requirements of European Archaeological Heritage Management Convention and World Bank procedures. In this connection, the study represents first attempt to set out according to the standards mentioned above.

Besides, such a study sheds light to the little known past of the region within the framework of the interdisciplinary archaeological studies by application of suitable survey techniques and methods. Therefore, strict measures and well-developed methodology have been implemented to achieve our scope and mitigate serious temporal and seasonal constraints confronting the archaeological studies; which have been detailed in this report.

The results of paleo-environmental, paleo-anthropological and reconnaissance field studies, as well as archaeological extensive surveys conducted within the scope of archaeological research and assessment for BTC Crude Oil Pipeline Project demonstrated the archaeological potential of the sub-regions along the pipeline route, all of which have different ecosystems from each other; and thus, provided a broader vision to envisage the heritage management strategies for the detailed engineering phase.

Preliminary archaeological studies on the impact areas of the 1100 km-long and 0.5 km wide corridor of Baku-Tbilisi-Ceyhan pipeline route have been carried out by one reconnaissance team and five archaeological fieldwork teams under seven zones determined according to the different geographical and climactic conditions along the proposed route. However, to cope with the re-routing and route narrowing of engineering actions and considering probable adverse impacts given in section 4, archaeological study extended up to 1 km-0-1 km. wide corridor along the pipeline route, and include all archaeological-cultural entities within that range.

The regions that the pipeline route ran through in the preliminary studies of “Archaeological Research and Assessment for BTC Crude Oil Pipeline Project”, are among the least studied and unfamiliar parts of Turkey in terms of archaeological knowledge. Being aware of their insufficiency, the archives of the Regional Committee of Preservation of Cultural and Natural Entities, and Museums of Republic of Turkey, Ministry of Culture have been scanned together with other publications and documents concerned with the region. Due to the reasons stated above, methodology has been developed towards obtaining the systematic information appropriate for archaeological impact studies and cultural heritage management purposes by means of field studies in order to establish a fast and reliable database.

A standard format and field record have been designed for the field studies to be used in constructing the basic database of archaeological assessment. Information seminars have been arranged and meetings were held with the teams involved in field studies about the format and procedures to be followed before they have been mobilized. Main concern in these seminars was the implementation of the pre-designed format in field studies in order to achieve a similar minimum standard that would allow fieldwork data to be evaluated altogether. 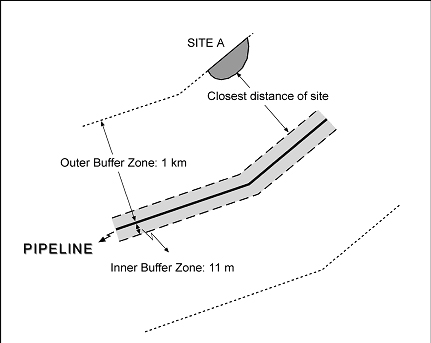 The Illustration of the Closest Distance of the Archaeological Sites to the Pipeline Construction Area. 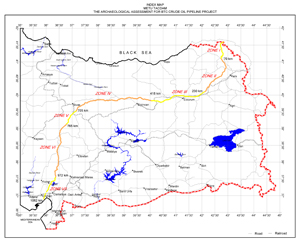 Index Map of Archaeological Sites Along the Pipeline. 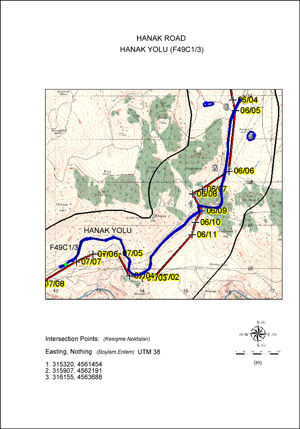 Hanak Road: An example data-sheet from Archaeological Database that indicated an ancient route (blue line) and the Pipeline (red line).